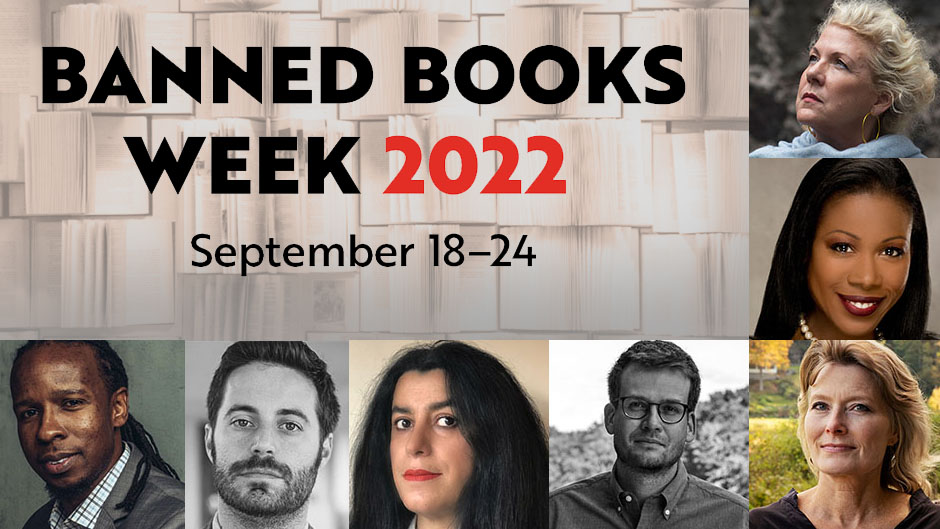 Banned Books Week (September 18 – September 24) is an annual celebration of our right to read. The theme for 2022 is “Books Unite Us. Censorship Divides Us.” A recent report from the American Library Association found a rise in the number of book banning attempts, especially books that cover race and racism in American history, LGBTQ+ identities, or sex education.

During Banned Books Week, we are presenting authors who are fighting for freedom of expression and open dialogue. Our speakers challenge the notion of restricting or banning these indispensable books that encourage free-thinking, allow for self-expression, and uplift the stories and experiences within their pages.

John Green’s coming-of-age novel Looking for Alaska is based on his early life and explores the themes of grief, hope, and youth-adult relationships. It was named the most complained about book of 2015 in America for its”offensive language” and “sexually explicit descriptions.” Green has spoken out against a school board candidate’s push to ban his novel in his hometown.

Marjane Satrapi’s prominent graphic memoir Persepolis recounts her early years living in the capital of Iran during the turbulent events of the 1970s and 1980s. Persepolis has stirred up controversy for its political viewpoints and has been challenged due to claims of “graphic language and images that are not appropriate for general use.” Satrapi has criticized the ban, reiterating that her book doesn’t teach readers to be violent or to hate.

One of the top 10 most challenged or banned books of 2020 was Dr. Ibram X. Kendi’s Stamped From the Beginning because of claims that the book contains “selective storytelling incidents and does not encompass racism against all people.” The winner of the National Book Awards for Nonfiction, Stamped From the Beginning follows five historical figures and offers readers unwashed versions of who they were and the role that racist ideas played in their lives. Dr. Kendi has spoken out against the banning, saying that “kids today need the types of books that are being banned.”

Isabel Wilkerson’s New York Times-bestselling Caste explores the unspoken hierarchies that divide us across lines of race and class. It has been pulled from libraries in Texas because it generates “discomfort, guilt, anguish, or any other form of psychological distress because of race.”

Garrard Conley’s New York Times-bestselling memoir Boy Erased traces the complex relationships among family, faith, and community. In his heart-breaking, at times triumphant story, he speaks about love, compassion, and understanding. Speaking about how his book has been placed on a banned list in Texas, Conley urges people to protect books and argues that banning books is never a good thing.

Jennifer Egan joined the PEN America Board in 2012 and completed her term as president in 2020. As the president of PEN America, she advocated for the goal of celebrating writing and defending the freedoms that make it possible. In her 2018 Literary Hub piece, she wrote that “few would dispute that the suppression of writers presages deep and ominous problems in a society.”

As the first woman elected as PEN International’s president since its founding in 1921, Jennifer Clement wanted her organization to commit to the safety and support of women writers around the world. The resulting manifesto has since transcended PEN and been adopted by organizations around the world. Clement addresses freedom of speech, women’s rights, and the creative process behind her lyrically-written, powerful manifesto.