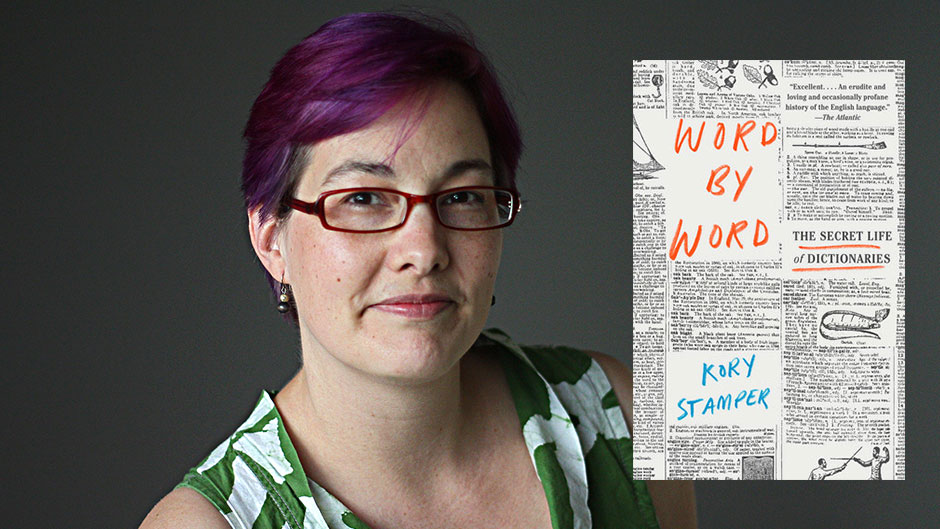 Kory Stamper’s debut book Word by Word, is based on her lifelong love of language and her almost 20 years as a lexicographer and editor for Merriam Webster. In Stamper’s hands, the history of the English language is endlessly surprising, from the occasional controversies that accompany new additions to the dictionary, in which words can take nearly a year to define, to unexpected etymologies, like the first usage of “OMG” in 1917. In navigating the tricky decisions and complex conversations involved in describing the way we communicate, Stamper fearlessly defends the relationship between the dictionary and the world at a time when language is evolving more quickly than ever.

Language belongs to those who use it, and through her career Stamper has worked to make lexicography accessible to the public in playful and irreverent ways. Whether illuminating the difference between “octopuses” or “octopi” on camera, demystifying pop culture’s contributions to language, or tracing the complex origins of swear words through her contributions to the Strong Language blog, Stamper finds profundity, humor, and wonder in the ways we communicate every day. By taking words beyond the dictionary, Stamper shows their far-reaching implications in the world of social justice and personal identity.

As a speaker, Stamper’s love of language is infectious, and her insightful speeches navigate the complexities of words and language with ease and wit. Stamper goes beyond merely defining words, revealing the hidden ways language shapes our understanding of the world, ourselves, and each other.

The Language in the Mirror: Dictionaries, Inclusivity, and The Irritating Case of “Irregardless”
Inclusion stretches and challenges us in unexpected ways—and not even the dictionary is exempt. Join Kory Stamper as she takes you on a wild romp through the ways that the dictionary must follow the language into inclusivity, and how tracking and recording the language puts us face to face with the need to be inclusive and our own assumptions about what inclusivity is.

A (Very) Brief History of the English Language
Have you ever wondered why “comb” and “tomb” don’t rhyme, or why it’s “bring / brought / brought” but not “sing / sought / sought”? Why is English so full of redundancy, and why does it allow contradictions like “free gift”? Who’s in charge here? Join Kory Stamper on a hilarious romp through 1,500 years of linguistic history as she explains how English ended up this way and makes you fall in love with this vibrant, wild language.

The Dictionary Wars: Noah Webster, Joseph Worcester, and the Creation of the American Dictionary
The end of the Revolutionary War saw another battle emerge: the battle for American culture. This battle was waged on many fronts, but one surprising one was lexicographical. Join Kory Stamper as she introduces you to Noah Webster, a forgotten Founding Father and linguistic rabble-rouser, and Joseph Worcester, his linguistically loyalist protege turned competition, as they and America waged The Dictionary Wars.

“Kory was absolutely brilliant, receiving a standing ovation from the Chautauqua audience and declared by several community members as one of the best Chautauqua lectures in recent memory. I can share with you, having worked with many speakers for Chautauqua’s renowned platform, Kory delivers an exceptional presentation.”
—Chautauqua Institution

Praise for Word by Word

“[An] eloquent love letter to letters themselves. . . . A cheerful and thoughtful rebuke of the cult of the grammar scolds.” —The Atlantic

“Both memoir and exposé, an insider’s tour of the inner circles of the mysterious fortress that is Merriam-Webster. Stamper leads us through her own lexicographical bildungsroman, exploring how she fell in love with words and showing us how the dictionary works, and how it interacts with the world that it strives to reflect.” —Adrienne Raphel, The New Yorker

“Word by Word cherishes the dexterity involved in making dictionaries, and . . . proves refreshingly attentive to its human stories. Part of its quirky charm is a delight in the idiosyncrasies of others—not least Merriam-Webster’s many correspondents.” —The Wall Street Journal

“A delectable feast. . . . [Stamper] declaims elegantly on the beauty and necessity of dialect, how to evaluate emerging words, and many other topics. [She] is at her best when entertaining the reader with amusing etymologies, celebrating the contentiousness of grammar, and quoting annoying emails from an opinionated public,” —Publishers Weekly (starred review)